Whatever happened to the normal fan who just buy her idol’s albums and watch his TV dramas? I’ve certainly come a long way after finishing the drama that got me into him, My Girlfriend is a Gumiho. Lee Seung Gi. I must admit I started liking him in that drama because he’s too adorable. He’s one friggin talented man. An all-around entertainer – singer, actor and host. I bought his current album that time, Shadow Repackaged, and eventually fell in love with his songs. But when I started watching 1N2D I swear there was no turning back. Since then I have wanted to come to Korea because of him, learn Hangeul because of him, appreciate Korean culture because of him. At one point I even wanted to become a Korean just like him. When it was announced that he was having a December concert in Seoul, I did everything in my power to come to that concert. And of course I did. I even learned a bit of Hangeul beforehand to prepare myself for a non-English speaking country. I was a bit scared going to a new country for the first time, since tabs would not be able to accompany me. So I tagged my sister along so I would not be walking the streets of Seoul alone. I could not fully express the happiness I felt when I laid first step at the airport. So this must be the same air Seunggi was breathing. ^^
The concert was daebak! Seeing Seunggi for the first time was exhilarating. I’ve only seen him on TV before. I took several pictures and videos, not understanding that it was prohibited. Too late when a security personnel warned me, I already had half of the concert on my memory card. It was kind of sneaky, but I was proud of it. I even completed his previous albums on that Seoul trip.
After his fifth album Tonight came out, a couple of months later his drama, King 2 Hearts was aired. When it ended I felt a bit sad, maybe because he was not always available on TV anymore, what with him quitting both of his popular variety shows, 1N2D and Strong Heart. His common activities became CF and magazine shoots, fansignings and his concert in Japan. His more recent activity was becoming a torchbearer in the London Olympics.
And so one could not fully imagine how thrilled I was when news about his Singapore fanmeet broke out. And what was totally shocking was how it fell on the same date as my family trip. He held a press conference a day before his fanmeet which I was also able to witness. Watching Seunggi so close is unbelievable. He looked lovelier. His face too small and his smile too charming. He was a great conversationalist, as always. He tried his best speaking in English and it was so impressive for a Korean. He’s just too perfect. Too good to be true.
The fanmeeting itself was unforgettable, too. He interacted actively with us and sang 8 songs. We had very good seats, but too bad taking photos was not allowed. There was a group picture-taking with Seunggi for every group of 30s, and Ate was so lucky to have touched his hand! I was contented seeing his beautiful face up close, such a mystery that a creature like him existed. It was a breathtaking experience.
Last year, I was keen on going to his concert because I thought maybe it would be the last time I would get too involved with an artist, and I really wanted to experience something like it, thinking maybe I would get too old and tired this year. But it was just announced that he will hold another one again on December, and after that SG fanmeet I’m not sure if I could still hold back. I’m trying my best to become a normal fan as I could. But god I think I’m going to lose it, that I’d be one heck of a crazy fan. I must go to this concert, and fulfill my duty as a true and supportive fan. I never would have thought that I still have the energy to fangirl at my age. It was still Moffatts when I had this kind of energy, some 14 years ago. ^^
My life now is never complete without my daily fix of Seunggi. Listening to his music, looking at his photos and constantly updating myself news about him. He’s too inspiring, he has accomplished so much at such a young age. Maybe that’s why he has a lot of ahjumma fans and even fanboys, too. I maybe selfish saying this, but I hope he doesn’t marry, or serve in the military just yet. I’m still enjoying him right now, and I know many others still are.  When the time comes I hope he marries a girl that he deserves, and like a true fan, I hope I would still be able to support him and give my love. 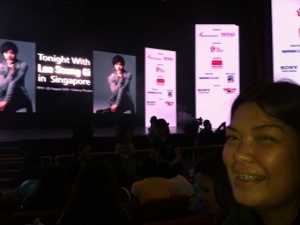 Rainy, foggy and chilly day in Baguio! Took late lunch in our favorite David’s Teahouse, sipped a hot chocolate in Starbucks, and now cozying under the sheets of the elegant Camp John Hay Manor. Lovely way to end the long weekend of travelling. 🙂

Lola Beth is Tabs’ favorite granny, even though she is not his immediate grandmother (she’s a sister of his mother’s mother). She was the one who took care of him as a little child and have lived with them for several years. She cooked for the family and especially for tabs’ requested foods. You could say she’s contributory to tabs’ fat deposition. Tabs and lola even lived for a year in Dasmarinas, Cavite, when tabs studied Biology in DLSU. I met her when we were still a new couple, and she criticized my huge eyebags.^^
She got sick in 2008 and we visited her a couple of times in Cainta, where she was then living with her relatives, asking for financial assistance. She doesn’t have children, only adopted ones she raised who don’t care too much about her, the way I see it. She had 2 dogs she dearly loved whom she treated like her own children.

Lola Beth passed away yesterday. I couldn’t help feeling sad though I barely know her. Tabs told me he had been thinking about lola’s cooking for several days now. Maybe she was thinking about him too, before she died.
We will be travelling up north to Ilocos on the long weekend. Due to schedule conflicts I don’t think we will make it before her interment. But we will still pay our respects after. Lola Beth, tabs will miss you! And thanks for everything on his behalf.

Several hours passed and I’m still pissed. I purchased tickets for Universal Studios Singapore online for our trip in less than 2 weeks. I was watching my budget since practically I would be the one spending for the whole trip. Good thing my father is already a senior citizen thats why I got one of the tickets at SG$32 when a regular adult at non peak is at SG$68. I plan on going there on a friday which is also coincidentally a non peak day, compared to  a peak rate of  SG$74. And shit suddenly happened when I accidentally purchased a 4 adult and 1 senior. And we are just 4. I already emailed them, and no, it cannot be refunded. The Agcaoilis and I are coming back again in September, but we already got tickets. It will be one wasted ticket. I was surprised how a SG$68 or around 2,300 pesos could affect me tremendously.  And there I was thinking of what I saved with a senior rate. Stupid. I was in a bad mood the rest of the day, big time.

Its been raining heavily almost nonstop for a couple of days now. It feels like a typhoon one after another when they said there’s even no typhoon this time. I instantly plugged my electronic devices to power outlet when I got home. Times like this power could shut off anytime. It was raining hard when I left the office, traffic started to swell, and sure enough, its already flooded in Queensway. Good thing I have a bigger car now, coz Jazz wouldn’t probably survive water that high. I don’t know, but whenever it rains this hard I kind of get scared. Though I didn’t have any bad experience with flood or something like that. I just think a lot about my loved ones’ safety, mostly, and I realized as I’m getting older, I frequently pray for them, especially Tabs. I think about my cats too, maybe stuck under cars shivering from cold and wetness. Good thing I fed some of them earlier when rain slowed down. My dogs are lucky and sheltered, in a cold air-conditioned room I’m maintaining just in case it blacked out, at least it would remain cold through the night.

Also, its very discouraging to go out, like go to gym as I planned. I hope on my birthday the rain won’t be as hard as this one. My birthday month really is a rainy month. Growing up, it always rains on my birthday. Now that I think about it, how about LSG’s fanmeet.. I hope weather would tame by that time. I would probably move mountains so I can be there, come hell or high water. Praying for a finer weather! And also, wishing for everyone’s safety this rainy season. 🙂

Woke up feeling giddy coz its August! Its my birthday month! 🙂

Well, there are actually a couple of reasons why I anticipate this month. First, of course, its my birthday again. Though I’m not keen being another year older again.. I’ve accepted this fact several years ago, that I would eventually turn old and gray even though my heart remains in my 20s. 😀 Second, its my family’s Singapore trip later this month. And third, its Lee Seung Gi’s fanmeeting on our SG trip! Yey!

And oh, August is just a month away from -ber months! My favorite time of the year is just around the corner.. Christmas! ❤