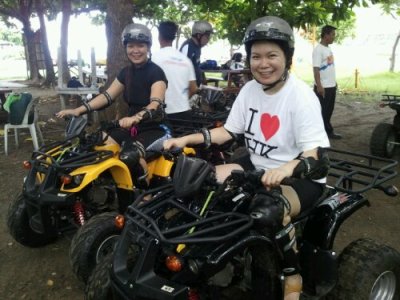 This is my 3rd time going to Corregidor, twice back in 2008. The day tour was pretty much the same, hopping in a tranvia and getting off in the historical spots like Mile-long barracks ruins, Battery ground, museum, marble tomb of fallen soldiers, etc. and of course the Malinta tunnel lights and sound show. This time around our group of 11 opted to stay overnight to catch more activities. The sunset tour was a bit disappointing because it was too cloudy to see the sun setting. The night tunnel lateral tour was a bit exhausting. I never thought Malinta tunnel was that extensive and smartly engineered. We toured several laterals including the 1000 bed hospital, and even experienced total darkness by switching off our flashlights. It was what the soldiers felt in WWII when Japs continue to bomb the tunnel and power goes out.

In the morning, we got up as early as 5am to catch the sunrise. Only the clouds were not too cooperative as they continue to block the rising sun. We headed to the Japanese tunnel after, which is relatively shorter than Malinta tunnel. However, what a surprise. It was too steep there were ropes on the sides to cling to, and at the end there was a 90degree stair to climb. I must’ve lost a couple of pounds on that short walk.

After breakfast we tried one of their newer activity, the zipline. It was not the common prone position kind, the harness supports the thigh area in a sitting position, rope above our head. It was short but enjoyable nonetheless. Our oldie companions went for a swim at the beach after, and 4 of us tried ATV. I have tried this a couple of months ago in Boracay, driving in highway. But here, we only have a trail to follow, and it was so hot I was getting sick of driving on the same trail over and over again. One hour was waay too long. Mine even ran out of gas I got stuck in the middle of fields under the scorching heat. I desperately need anything bleaching after this. Went for a quick swim at the pool and it was lunchtime. I wolfed down an order of carbonara and clubhouse sandwich we’ve been wanting to have since last night. A few hours later we were off and back to Manila again.

Honestly, I’m not a history kinda person, and I think Corregidor is for more of history buffs like Tabs. This place has too much history. And I loved it how they preserved the place, so that tourists and locals alike would know how brave and unyielding it was in WWII. A tour definitely recommended to take even just once, to pay respect to the land who bravely fought for us during the war.