I know I have expressed my love for BSB several times in this blog, and waaay more in the past, and going to one of their concerts is an ultimate goal of a fangirl like me. I may not be as diehard as I was in highschool, or I may not have their latest album, or I may not even afford their meet & greet, BSB will always hold a special place in my heart and memory that nothing and no one can ever take away.

Soo, drama aside, the only thing that stressed me out in this concert is the will call process. As excited as I was to be able to grab good seats, I purchased the vip tickets on their website during presale. It was stated there that I will be charged but the tickets will be picked up at the event box office. I was to receive an email on how to claim the tickets 4 days before the concert. 2 days before the event I still haven’t got any email, and I only got a reply when I emailed them one day before, a generic reply with no specific place to claim the tickets. I was desperate because I was charged $353 for 2 tickets already. Anyways, good thing I updated myself with the PH fanclub so I was able to get info that there’s a window in the Arena ticket sales that were for will calls. It was my first time to experience the will call setup, since its not common in PH.  Turned out that those who received emails 4 days before the concert were the upgrades, meaning they have meet & greet / soundcheck. The platinum upgrade is $599 where fans go up the stage, excluding the concert ticket itself. It was amazing how fans would go lengths to be closer to their idols.

Well, I still got premium seats, 4 rows from the stage. Maybe I was too close, that my neck ache from looking up the whole time. But who am I to complain, of course. It was not every year that I get to see these boys, still outdoing themselves with their performances. They sang most of their hits from the past, and maybe 4 songs from their new album that I regret that I haven’t listen to yet. It was not yet in Spotify. 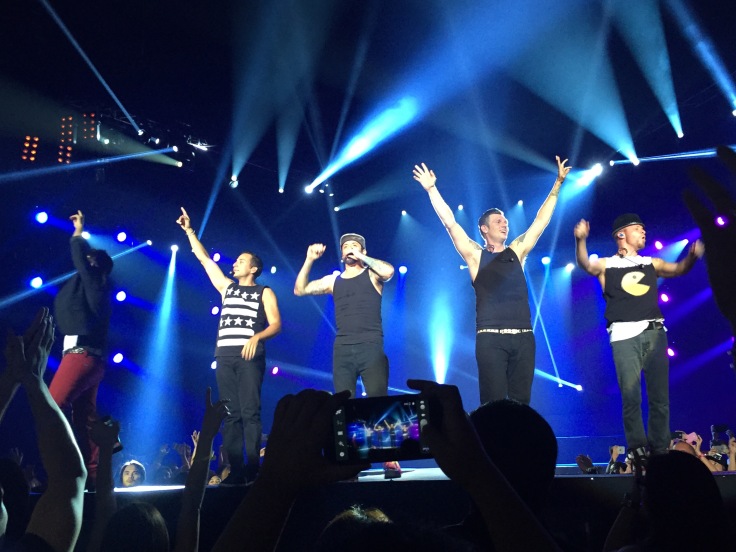 In 2012 NKOTBSB concert, they were just 4. Now Kevin has rejoined once more. They were getting old, lines show from their faces, their moves lessen a bit (except Nick who was crazy as always), and their voices more mature and different like Brian’s (who I think wasn’t too well). But whatever it was, it never mattered. They were the best boyband to ever grace this generation, they are brothers and family, and they make good music from 20 years to who knows how long, for us to enjoy and make witness for the years to come. Its like paying homage to a legacy today. ®